Skippers main functionality is ORM models management. Each ORM model consists of several basic elements. In this article, you will find overview of these elements. All elements are created using Skipper Model tools.

Project represents one specific application. Each project is defined by ORM framework and MVC framework and contain one or more modules.

Modules are used to represent stand-alone parts of your model. Based on ORM and MVC framework you can use module to represent plugins, packages or modules itself. Depending on ORM framework modules represent either individual schema files or directories.

Those two element types serve for better visual orientation in ORM model. Regions can be created anywhere inside the modules. You can then position entities and comments inside the regions for easier model readability. Comments can be placed anywhere in the module or region to write down important notes.

Main element of ORM model is entity. Each entity represents one serializable object from user’s code. It’s up to ORM framework how the entity is stored to database or other storage. The entities are visualized using the extended ER diagram relational notation. 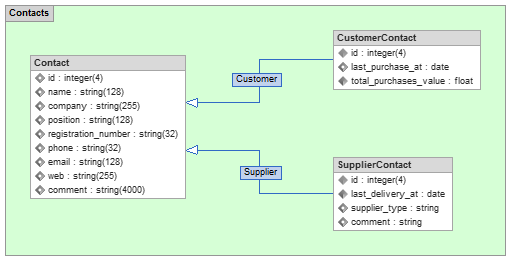 Indexes are used to optimize access speed to data storage through selected fields. Apart from previous model elements indexes aren’t currently displayed in visual model. Indexes can be displayed in project tree or inside the entity dialog. 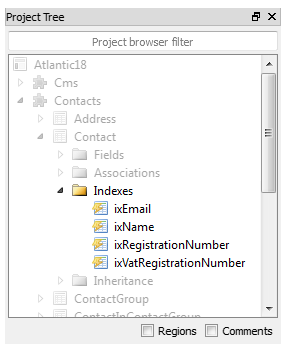 For detailed description of how to edit model elements see Editing model.